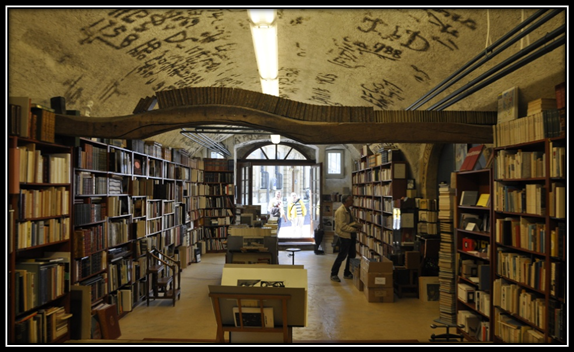 Almost every corporation and government agency has already built, is in the process of building, or is looking to build a Managed Metadata Environment (MME), either as part of a metadata solution or within an enterprise data management initiative.  Many organizations, however, are making fundamental mistakes.  An enterprise may build many metadata repositories, or “islands of metadata” that are not linked together, and as a result do not provide as much value (see “Where’s my metadata architecture?” sidebar).

Metadata is information about the physical data, technical and business processes, data rules and constraints, and logical and physical structures of the data, as used by an organization.  These descriptive tags describe data, concepts, and the relationships between the data and concepts.

The managed metadata environment represents the architectural components, people and processes that are required to properly and systematically gather, retain, and disseminate metadata throughout the enterprise.  The MME encapsulates the concepts of metadata repositories, catalogs, data dictionaries and any other term that people have thrown out to refer to the systematic management of metadata.  Some people mistakenly describe an MME as a data warehouse for metadata.  In actuality, an MME is an operational system and as such is architected in a vastly different manner than a data warehouse.

Companies that are looking to truly and efficiently manage metadata from an enterprise perspective need to have a fully functional MME. It is important to note that a company should not try to store all of their metadata in a MME, just as the company would not try to store all of their data in a data warehouse.  Without the MME’s components, it is very difficult to  effectively manage metadata in a large organization.

The six components of the MME, shown in Figure 1, are: 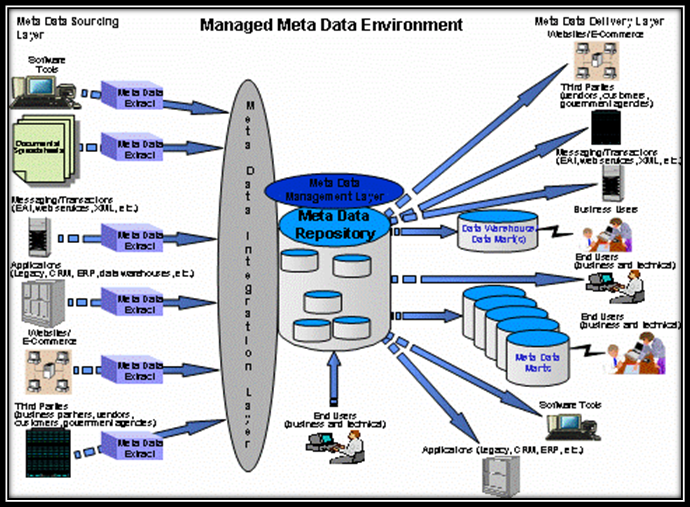 Distributed architecture includes several disjointed and autonomous metadata repositories that have their own meta models to dictate their internal metadata content and organization with each repository solely responsible for the sharing and administration of its metadata.  The global metadata repository will not hold metadata that appears in the local repositories; instead it will have pointers to the metadata in the local repositories and metadata on how to access it.  See Figure (1). At EWSolutions we have built MMEs that use each of these three architectural approaches and some implementations use combinations of these techniques in one MME. 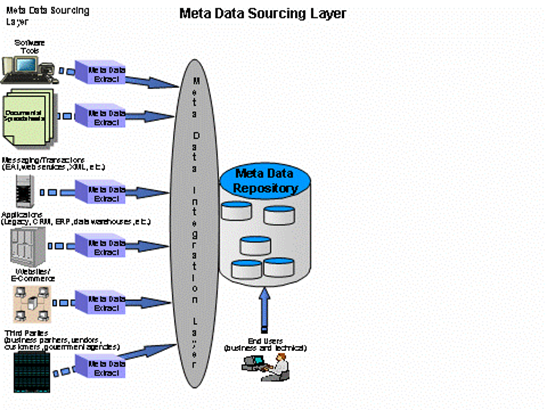 In these situations, the timeliness and consequently the accuracy of the metadata can be compromised.  For example, suppose that you have built one metadata extraction process (Process #1) that reads physical attribute names from a modeling tool’s tables to load a target entity in the meta model table that contains physical attribute names.  You also built a second process (Process #2) to read and load attribute domain values.  It is possible that the attribute table in the modeling tool has been changed between the running of Process #1 and Process #2.  This situation would cause the metadata to be out-of-sync.

This situation can also cause unnecessary delays in the loading of the metadata with metadata sources that have limited availability/batch windows.  For example, if you were reading database logs from your enterprise resource planning (ERP) system you would not want to run multiple extraction processes on these logs since they most likely have a limited amount of available batch window.  While this situation does not happen often, there is no reason to build in unnecessary flaws into your metadata architecture.

As a general rule the MMEs holds between 5-20 gigabytes of metadata; however, as MME’s are looking to target data audit related metadata then storage can grow into the 20-75 gigabyte range and over the next few years you will see some MME’s reach the terabyte range. 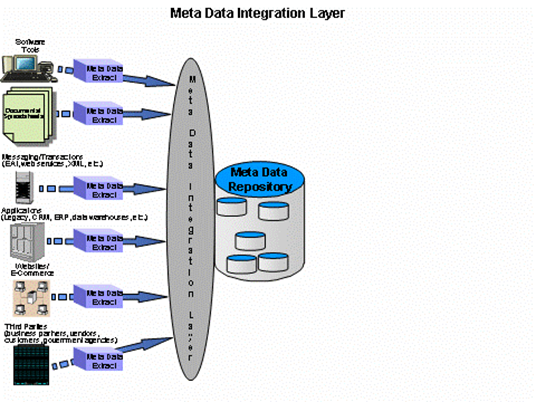 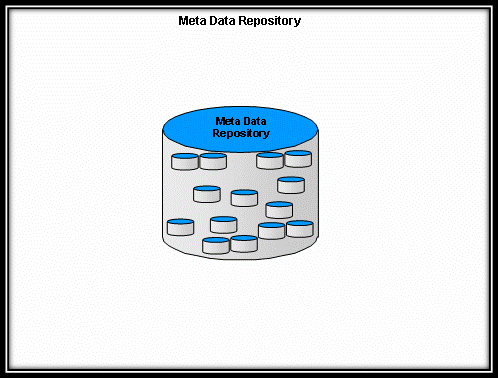 The Metadata Repository should be generic, integrated, current and historical.  Generic means that the physical meta model looks to store metadata by metadata subject area as opposed to application-specific.

For example, a generic meta model (a model of the metadata concepts) will have an attribute named “DATABASE_PHYS_NAME” that will hold the physical database names within the company. A meta model that is application-specific would name this same attribute “ORACLE_PHYS_NAME”.  The problem with application-specific meta models is that metadata subject areas change.  To return to our example, today Oracle may be our company’s database standard.  Tomorrow we may switch the standard to SQL Server for cost or compatibility advantages.  This situation would cause needless additional changes to the change to the physical meta model. (2)

A Metadata Repository also provides an integrated view of the enterprise’s major metadata subject areas.  The repository should allow the user to view all entities within the company, and not just entities loaded in Oracle or entities that are just in the customer relationship management (CRM) applications.

A good metadata repository stores both of these definitions because they both have validity, depending on what data you are analyzing (and the age of that data).

Lastly, it is strongly recommended that you implement your Metadata Repository component on an open, relational database platform, as opposed to a custon-designed, proprietary database engine.

The Metadata Management Layer provides systematic management of the metadata repository and the other MME components (see Figure 5).  As with other layers, the approach to this component greatly differs depending on whether a metadata integration tool is used or if the entire MME is custom built.  If an enterprise metadata integration tool is used for the construction of the MME, than a metadata management interface is most likely built within the product.  This is almost never the case; however, if it is not built in the product, than you would be doing a custom build.  The Metadata Management Layer performs the following functions: 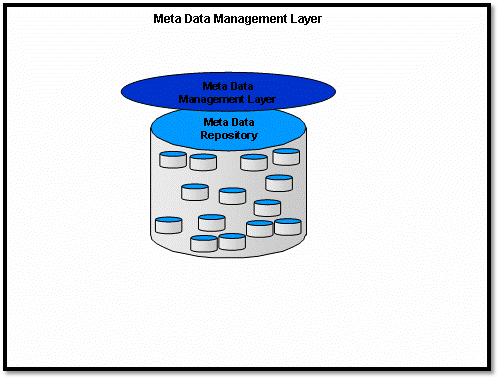 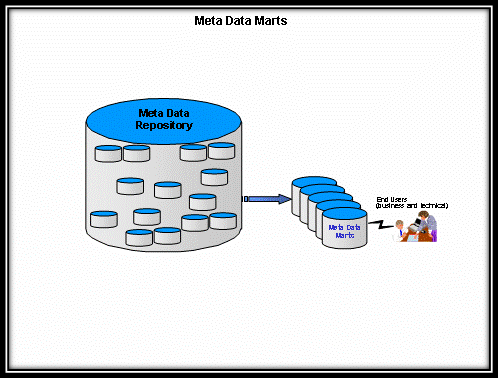 There are two reasons why an MME may need to have metadata marts.  First, a particular metadata user community may require metadata organized in a manner other than what is in the Metadata Repository component.

Second, an MME with a larger user base often experiences performance problems because of the number of table joins that are required for the metadata reports. In these situations it is best to create metadata mart(s) targeted specifically to meet those user’s needs.  The Metadata Marts will not experience the performance degradation because they will be modeled multi-dimensionally.

In addition, a separate meta mart provides a buffer layer between the end users from the Metadata Repository.  This allows routine maintenance, upgrades, and backup and recovery to the repository without affecting the availability of the Metadata Mart.

The Metadata Delivery Layer is the sixth and final component of the MME architecture.  It delivers the metadata from the Metadata Repository to the end users and any applications or tools that require metadata feeds to them (Figure 7).  (3) 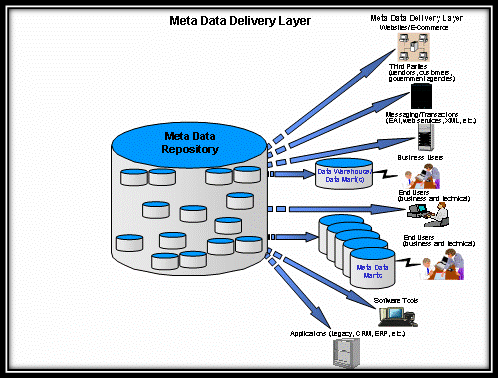 The most common targets that require metadata from the MME are:

For professionals that have built an enterprise metadata repository they realize that it is so much more than just a database that holds metadata and pointers to metadata.  Rather it is an entire environment.  The purpose of the MME is to illustrate the major architecture components of that managed metadata environment.

(1) See Chapter 7 of “Building and Managing the Metadata Repository” (David Marco, Wiley 2000) for a more detailed walkthrough of these approaches.

(3) See Chapter 10 of “Building and Managing the Metadata Repository” (David Marco, Wiley 2000) for a detailed discussion on metadata consumers and metadata delivery.