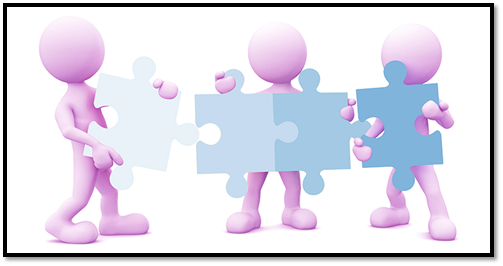 Agile project management requires self-organizing teams that can adapt to a variety of projects, including data warehousing, business intelligence, and analytics initiatives.

Extreme Scoping is an agile project management approach for building data warehouse and business intelligence (DW and BI) applications.  This new development approach requires a new dynamic project team structure.  Before exploring the new team structure, it is important to review how teams are organized traditionally.

Traditional teams depend on the project manager to coordinate and assign tasks to individual project team members and to track and report the progress of the project. The project manager also reviews the work deliverables and makes project-related decisions. The individual project team members are responsible for their own task deliverables, which they hand off at the appropriate time.

The only collaborative interactions that involve the entire team happen once a week during the status review meetings. This approach works well on very large, multi-year projects that use traditional methodologies and have 20 to 30 people on a team, but it is ineffective for DW and BI projects that must deliver in 90 to 120 days.

In “Extreme Scoping” there is a recommended the software release approach for building applications. In extreme scoping the project management function is performed by the entire core team and not by a single project manager. The following figure (Figure 1 – DW/BI Team Organization) illustrates how a self-organizing project team is organized.

The core team should be staffed – at a minimum – by a seasoned project manager; a business representative (end-user or subject matter expert) who has the authority to make decisions and to set policies; an enterprise information management (EIM) person who is trained in data management disciplines such as data governance, logical data modeling (not database design), normalization rules, data and metadata standards, taxonomy; and at least one senior technical person (lead developer or technical architect) with strong programming and technology skills. All core team members together comprise the project management team, which replaces the single project manager function. The core team members manage all software releases of an application, thus ensuring continuity and knowledge transfer.

Core teams are self-organizing SWAT teams where all members of the team (together as a team) coordinate and assign tasks to each other. They review one other’s work, collaborate on project issues, and make project-related decisions. The entire core team meets every day for a status review, and the core team members take over each other’s tasks when needed (for example, when a core team member is out of the office due to illness or vacation).

A core team must be very small; a team size of 4 to 6 people (per project) is optimal. Project core teams should never exceed 7 people.

The development track teams are led by the lead developer or technical architect from the core team. An organization may choose to have a lead developer or technical architect per development track, if that supports the organization more effectively and if the resources exist. Development track team members should be developers (and potentially a senior analyst) that have the skills needed for their particular track. They only participate in track-specific tasks for the duration of their track activities.

The extended team members play traditional roles and participate on the DW and BI projects on an as-needed basis, not on a full-time or daily basis. Members of the extended team may be heavily involved only at certain times during the project, or they may be called intermittently for their expertise and contributions. Extended team members include technicians and business people who contribute in much the same way they do on traditional projects. Extended teams include support roles such as technical support, operations, the security officer, IT auditor, the business sponsor, and other stakeholders.

The BI steering committee is an advisory body of business executives and senior business managers, who understand BI and DW, who support enterprise-wide activities, and who provide collective sponsorship. They meet on a regular basis to discuss, plan, staff, and fund business initiatives, such as DW, BI, MDM, CRM, CDI, and so on. They communicate necessary data integration principles to the organization. They stand behind a BI strategy that supports the business drivers. They fund an EIM group to perform enterprise-wide data management and data governance. They identify data owners and direct the data owners to identify data stewards in their line of business. They also separate business people from their operational responsibilities so they can participate as full-time members on the project core teams.

The dynamics of the core team or the development track teams are not the same as that of the extended team or a traditional project team. The core team is like the SWAT team at NASA in Houston, Texas. Although they have their assigned cubicles and offices, they do not spend most of their time in them. Instead they collaborate, brainstorm, solve problems, and make decisions together in a “war room” dedicated to their project. For example, the core team meets every day to review status and deliverables and to discuss roadblocks and solutions. Sometimes these meetings last ten minutes, at other times working sessions could be scheduled for half a day. During these sessions, individual assignments are distributed to the appropriate team members who will work on them after the meeting and report back the following day. If major roadblocks are encountered, they are addressed immediately and alternative solutions and contingency plans are prepared. The project manager and the business representative will take the alternative solutions and contingency plans to the sponsor for negotiation and/or a decision.

The development track teams function similarly to the core team, only on a smaller scale. They also meet every day to review the status and deliverables within their own track. And, they collaborate, brainstorm, solve problems, and make decisions together on their track-specific issues. In fact, they function similar to extreme programming (XP) teams sharing the prototyping activities of analysis, design, coding, and testing. Communication with the core team is established through the lead developer or technical architect, who is managing the development track team(s).

The extended team meets with the core team once a week, usually on the same day and same time of the week. The core team members establish the meeting schedule at the beginning of the project, and the sponsor sends out the notification to the extended team members. The meetings are scheduled for one hour, but could be as short as ten minutes if no major issues are to be discussed. The purpose of the weekly meetings is to keep all team members current with activities, status, and issues of the project.

There are a number of roles that are played by the members of a core team. Which specific role is applicable to a project depends on the scope of the work and the type of deliverable. Roles do not equate one-for-one to people. A person can, and probably will, play multiple roles, but one role can also be played by multiple people. Some roles are IT roles, while other roles are business roles. Note that one business person must be assigned to the project as an active full-time participant and to whom project tasks are given.

The roles played on the development track teams are mostly technical roles specific to a track. Which specific role is applicable to a project depends on the scope of the work and the type of deliverable.  Typical development tracks include ETL, front-end application, and metadata repository. Depending on project organization and available resources, one person may play multiple roles or one role can be assigned to multiple people.

It is impossible to have an agile development environment without converting traditional project teams into agile, self-organizing SWAT teams. The key is to keep all project teams small. Transfer the project management activities to the core team members collectively. Have a business representative on the core team, and assign the various core team roles and responsibilities to those core team members who have the most appropriate skills to play those roles. Development track teams can have as few as one developer in each team (per project) or as many as three or four.  Finally, include the extended team members on each project as-needed to ensure agility.